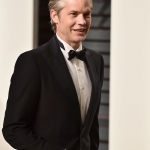 The “Santa Clarita Diet” star discussed his lovable co-star Drew Barrymore, his love for Ellen underwear, and how he’s making the best of a bare-all bind. Drew Barrymore and Timothy Olyphant sit down with TODAY contributor Lilliana Vazquez to talk about their new Netflix comedy-horror series “Santa Clarita Diet,” in which things take a very dark turn after Barrymore’s character dies. The actress calls the show “the best surprise mystery of my life.” (Source)