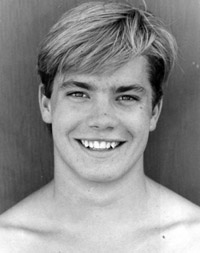 Timothy David Olyphant was born (May 20, 1968) in Honolulu, Hawaii, and raised in California. He attended Fred C. Beyer High School in Modesto, California. He was a competitive swimmer in high school and at the University of Southern California in L.A., where he studied fine art and theater; he was a finalist at the U.S. National Swimming Championships in the 200 Individual Medley. He left the university before completing his degree, moved to New York City and attended William Esper’s acting program.

Olyphant began acting onstage, and received the Theatre World Award for Outstanding Debut Performance for his performance as “Tim Hapgood” in The Monogamist. Olyphant subsequently appeared in SantaLand Diaries and Plunge on stage. He made his film debut in 1996’s The First Wives Club. He followed the role up with parts in the films Scream 2 (1997), Go (1999), The Broken Hearts Club: A Romantic Comedy (2000) and Gone in 60 Seconds (2000). During this time, Olyphant also guest starred in an episode of Sex and the City.

In January 2007, Olyphant appeared in the comedy Catch and Release, playing the love interest of Jennifer Garner’s character; Olyphant was cast in the role over several other known actors, including Matthew Fox. He next appeared in Live Free or Die Hard, as the villain, a cyber-terrorist and in Hitman, as the title character. His 2008 roles include Stop-Loss, about the Iraq War, playing a Lieutenant Colonel, Meet Bill, a comedy co-starring Aaron Eckhart and Jessica Alba, and a voice-acting role in Turok (2008) as Cowboy.

Olyphant served as the sports reporter for Joe Escalante’s morning show on LA radio station Indie 103.1, every Monday through Friday, until the channel’s demise in January 2009.

In June 2008 he joined the cast of FX’s show Damages, starring Glenn Close. As a result, his part in Samantha Who? was recast and filled by Billy Zane.

In 2009, he starred with Steve Zahn and Milla Jovovich in the paranoia-inspiring thriller A Perfect Getaway as an Iraq war veteran and possible serial killer of honeymooners on the Hawaii islands. In late November 2008, it was announced that he had officially signed on for the lead role of the town sheriff in the 2010 film The Crazies.

In the spring of 2010, he started playing the lead role of Raylan Givens in the FX series Justified. His character is a 21st century U.S. Marshal who, for his questionable tactics, is banished to the part of Kentucky in which he was born and raised. Givens wears a Stetson hat and behaves like an Old West sheriff. The show is based on a character created by Elmore Leonard in the novels “Pronto,” “Riding the Rap,” and “Fire in the Hole.” The pilot episode was an adaptation of the latter.

Stay Connected With Us!

This website is not affiliated to the actor, his accessors, relatives, projects, etc. It’s only a fansite, made by fans to fans. We don’t have any kind of contact with Timothy. Everything you find here has the copyrights to the respectives owners. Any copyright violation isn’t intentional.

This website uses cookies to improve your experience while you navigate through the website. Out of these, the cookies that are categorized as necessary are stored on your browser as they are essential for the working of basic functionalities of the website. We also use third-party cookies that help us analyze and understand how you use this website. These cookies will be stored in your browser only with your consent. You also have the option to opt-out of these cookies. But opting out of some of these cookies may affect your browsing experience.
Necessary Always Enabled
Necessary cookies are absolutely essential for the website to function properly. These cookies ensure basic functionalities and security features of the website, anonymously.
Functional
Functional cookies help to perform certain functionalities like sharing the content of the website on social media platforms, collect feedbacks, and other third-party features.
Performance
Performance cookies are used to understand and analyze the key performance indexes of the website which helps in delivering a better user experience for the visitors.
Analytics
Analytical cookies are used to understand how visitors interact with the website. These cookies help provide information on metrics the number of visitors, bounce rate, traffic source, etc.
Advertisement
Advertisement cookies are used to provide visitors with relevant ads and marketing campaigns. These cookies track visitors across websites and collect information to provide customized ads.
Others
Other uncategorized cookies are those that are being analyzed and have not been classified into a category as yet.
SAVE & ACCEPT